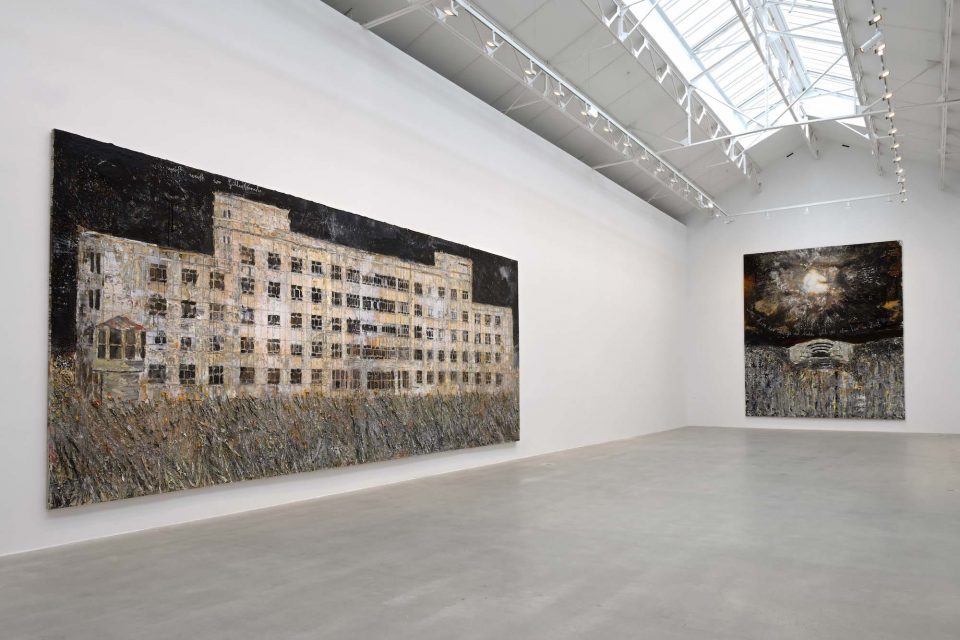 Born in March 1945, during the very last months of the Second World War, Anselm Kiefer is a German visual painter and sculptor. He became known in France thanks to his Monumenta in 2007, the first of a series of exhibitions/events in which the artist took over the Grand Palais’s nave and installed a monumental original work.

Pour Paul Celan (“For Paul Celan”) also marks the first exhibition of a single artist to fully invest the spaces of the Grand Palais Ephémère, located on the Champs de Mars. As we enter the building, we are immediately struck by the monumental paintings. The stark lights are cast upon them, contrasting with the darkness of the walls, and echoing the contrast found in his works.

Vast plains stretch into the night, here and there illuminated by ferns adorned with golden leaves, white clouds, or orange streaks, as if the earth had been burned. At times it is the heavens that are illuminated. The verses of Paul Celan (1920-1970), a poet of Jewish and Romanian origins who wrote mainly in German, written in white chalk form constellations in Kiefer’s paintings. Kiefer thus pays homage to Paul Celan, a witness and victim of the Holocaust, whose work seeks to describe the horrors of war by deconstructing the German language.

As you leave the exhibition, large metal shelves on which plaster molds, stones, plants, and clothes are piled on, like a large storage space for debris, block the view. This installation is a reproduction of Kiefer’s studio. The artist invites us not only to join his world, but also to witness his creative process.

As for the exhibition Hommage à un Poète (“Homage to a Poet”), it is installed in the immense building of the Thaddaeus Ropac Gallery – Pantin. More modest than the Grand Palais Éphémère, it is nonetheless one of the largest gallery exhibition spaces in Paris and a perfect setting for Kiefer’s paintings.

This time, Kiefer refers to other authors who inspired him: Ingeborg Bachmann (1926 – 1973), an Austrian poet who corresponded with Paul Celan; Ossip Mandelstamm (1891 – 1938), a Russian poet and essayist; and August Graf von Platen (1796 – 1835), a German poet and playwright. Ingeborg Bachmann and Ossip Mandelstamm inspired Kiefer through their attempt to express the trauma they experienced: the Second World War for the former, the Gulag for the latter. August Graf von Platen’s work is inscribed in the German Romanticism of the turn of the 19th century.

Literature is at the heart of Kiefer’s work: language allows him to explore the unspoken through the sonorities and subversion of words. This subversion is then used in the pictorial construction of Kiefer’s paintings, aided by the lyrical inspirations offered by these poets.

Anselm Kiefer seeks to understand, he wants to translate his experience and his distress, he seeks to grasp his invisible heritage. He strips away the darkness of his history, he shines a light in the middle of a dark sky, he illuminates snowy fields. A trolley flies away, poppies fossilize and line the ground of his gigantic canvases.

In his interviews, Kiefer often refers to the difference between “human” and “mineral” time. Different chronologies are intertwined in his works, both in the histories and memories evoked and in the materials used. The artist considers that a painting is never finished; it can, years later, still be worked on or even cut out. Several of the paintings exhibited are thus composed of old canvases to which more recent elements have been added.

Through his themes, Kiefer also addresses different temporalities. Installations such as the bullet-riddled, lead-weighted warplane offer a symbolic reference to the history of the Twentieth Century, and more particularly to the Second World War. However, the presence of vegetation, such as ferns, and the insignia inscribed in his skies evoke timeless elements that precede us. In this way he confronts key events of our history as well as the traces of our passage through a cosmic chronology which transcends humanity.

Kiefer’s work is politically engaged. These two exhibitions coincide with the beginning of the French Presidency of the Council of the European Union for six months and are therefore part of a reflection on what defines Europe through its history and culture. For the artist, it is a question of bearing witness to this grave heritage, and to the poets illuminating his paintings. For the artist, these stories must remain alive and present in the debates surrounding Europe.